Explore the Chippewa National Forest and Discover all of its Beauty

The Minnesota Northwoods is far-removed from everyday traffic and noise. The uniquely remote location and proximity to the heart of the Chippewa National Forest provides an abundance of wildlife.

There are four major areas that the Chippewa National Forest takes the most pride in: lakes and wetlands, heritage resources, bald eagles, and forest ecosystems. Each of these areas has an important part in the role in the history of the national forest.

This area has been home to people for over 10,000 years. The long established link to the land was interrupted by European explorers and traders in the early 1800s. Concern over Native American rights and use of the remaining pine forests promoted the formation of the Minnesota Forest Reserve — later called the Chippewa National Forest to honor its original inhabitants. Many of the Anishinabe (Ojibwe/Chippewa) continue to live in the traditions of their ancestors with close ties to the forest and it’s resources.

The Chippewa National Forest is home to the highest breeding population of Bald Eagles in the lower 48 United States! Over 150 pairs of the magnificent birds live among the pines and lakes of the forest. Eagles are often seen soaring near the larger lakes and along the Mississippi River or perching in old growth trees.

Located near the boundaries of three major vegetative communities (coniferous forest (pine, spruce, and balsam fir) to the north, hardwoods (aspen, birch, oak, and maple) to the south, and prairie to the west) the Chippewa National Forest has a very diverse ecosystem. Timberwolves, eagles, towering pines, and vigorous aspen are only part of the picture.

Start planning your next Minnesota Northwoods adventure today! Check out our Resorts, you’re sure to find one that fits you and your family. 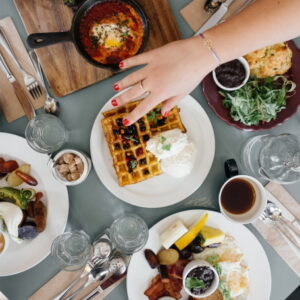 Find Your Next Northwoods Favorite!

The Minnesota Northwoods offers a variety of dining that will suit your needs. Bemidji, Blackduck, and Cass Lake each have unique dining experiences perfect for the whole family. Minnesota Nice Cafe – Bemidji Quality ingredients and traditional methods are used to produce exceptional home cooked meals, just like Grandma used to make! Their menu includes…